By cmadmin
Posted May 15, 2020
In Activities, Resort
Belize Named One Of the Top Birding Destinations in the World!2020-05-152020-08-25https://www.captainmorgans.com/wp-content/uploads/2017/10/captain-morgans-retreat-logo.svgCaptain Morgan's Retreathttps://www.captainmorgans.com/wp-content/uploads/2020/08/toucan.jpg200px200px
0 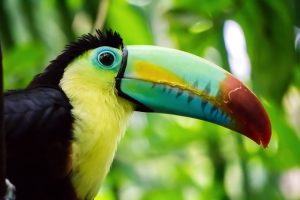 Bird lovers, plan your next vacation to Belize — Forbes Magazine has named Belize one of the top 5 birding destinations in the world for 2020!

Forbes lists Belize as a “vastly underrated” Central American nation. With incredible biodiversity ranging from coastal wetlands and mangrove swamps to the dense forests in the mountains, Belize has a population of over 600 species of birds, most of which call Belize home year-round. The species range from the majestic Harpy eagle and Agami heron to the iconic Keel-billed toucan and the Scarlet macaw.

Because there are so many birds in Belize, you will likely see them without looking far; however, according to Forbes, a good bird watching destination is actually the Caracol Mayan Ruins. Travel back through Belizean history to visit not only one of the most significant ruins in Belize, but also to catch glimpses of over 300 species of birds that nest on the ruins themselves. In addition to the birds, you may also spot deer, howler monkeys, or even jaguar.